It has been quite a while since my last blog entry.  So let's play catchup a bit.  Perhaps later I will expound on some of the more interesting points of those months, but for the time being I leave them to be recorded later, as it is such a large amount of accumulated experiences that it would be an epic undertaking and a long read.  So, I will proceed forward with the most current events in music.

The fall had a great many fun shows, CD releases, and interesting experiences.  However, my professional life was in a tumult.  Dealing with a boss who thoroughly hated me despite multiple appeals to her sensibilities was frustrating.  That behind me, it was time for the winter months to bring employment for me at the Ski Hill. 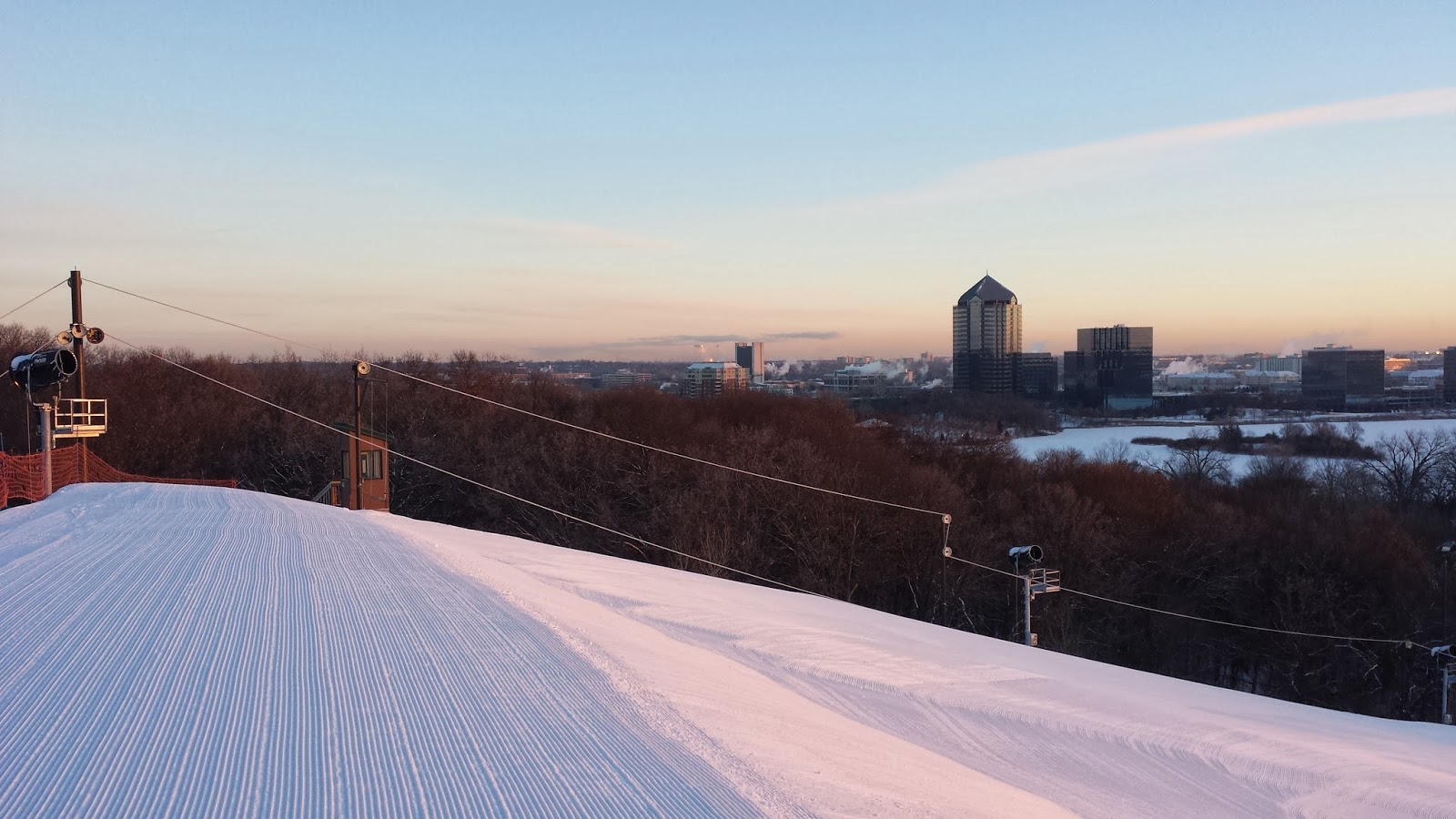 Soon the winter was upon us hard and strong.  The cold came early in November, bringing with it snow to cover the hills with a blanket of glistening white.  I returned to my position at the ski Hill in Bloomington, MN.  The snowfall and cold weather, which constrained much of the rest of our society, was instead a boon to the cold weather sports enthusiasts of the region.  I greatly enjoy the work I do at the hill.  I have the opportunity to bring the local music I love, along with admittedly more main stream Pandora Radio, to the slopes via my guitar amplifier.  The days are beautiful.  The skill level of the snowboarders and skiers who frequent the terrain park these days are far more impressive than the average more than a decade ago when I was in my nascent years of snowboarding experience.  Now people all wear helmets for one thing.  That's mostly because there has been a great push in the social dynamic towards the protection of our valuable brain boxes.  With the added security that affords people, they now likewise go much bigger than they often would years ago.  People throw cork 900's, backflips, front flips, 270's on to rail slides with 270's off, etc.  It's impressive and entertaining to watch.  Likewise, the experience of doing some mean tricks gets the heart rate going and provides a fantastic physical exertion.  I love riding. So, this has been much less about music than I originally anticipated, but perhaps it is high time I started simply using my blog as a means of recording my thoughts in general.  At the end of the year in 2013 I finished yet another physical journal.  It is such a liberating experience to recollect one's own experiences through your own thoughts and assessments of reality.  It helps to keep a person grounded. 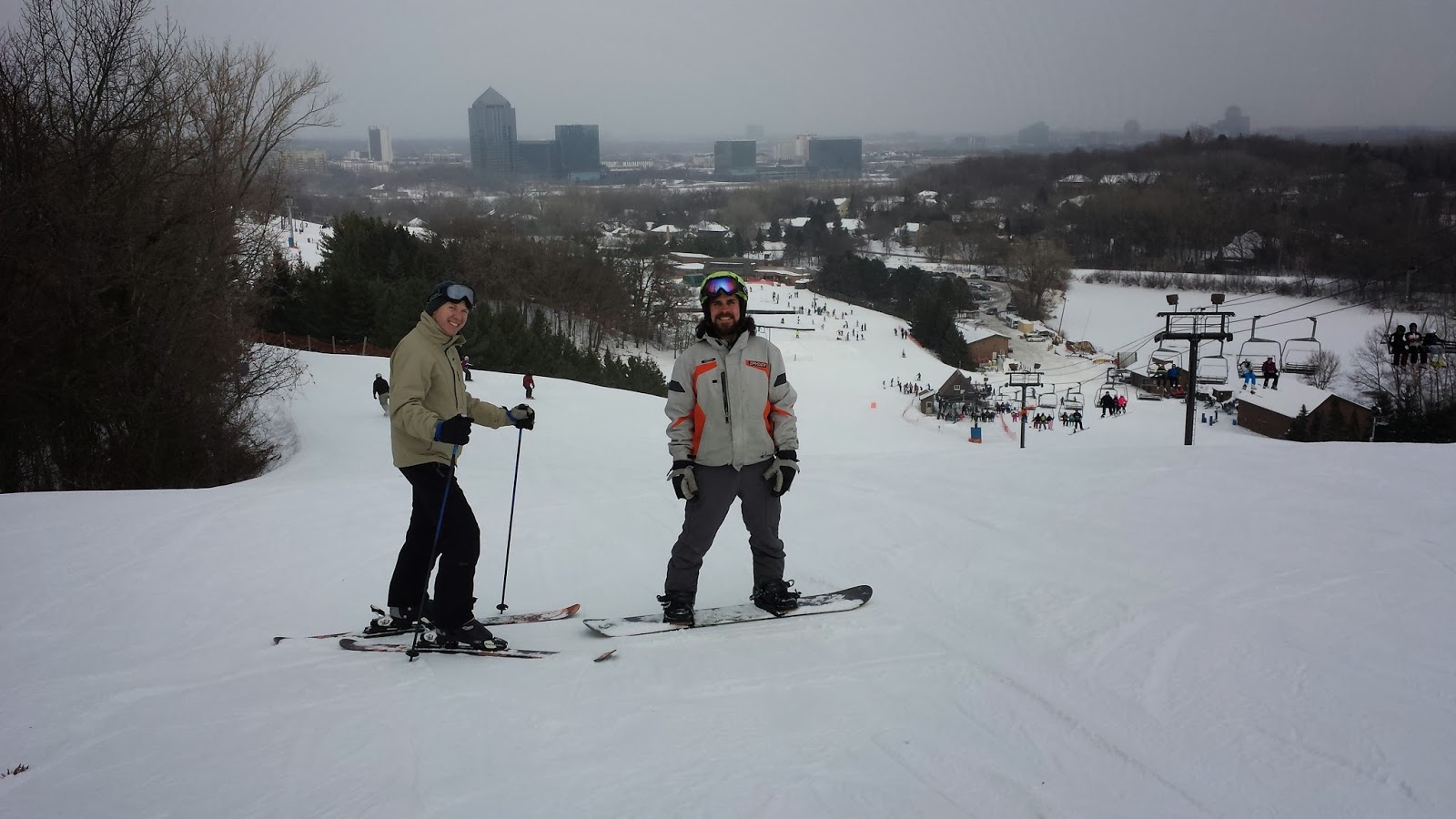 Among the great events of the recent months were several much anticipated CD release shows for bands I have been following, tours by other bands, some music video shoots, and my performances along with dozens of others tuesday nights at the open mic nights at Moto-I in Uptown Minneapolis.

The year to come promises to bear a great deal of musical fruit for the Twin Cities area of Minnesota.  There are a great deal of powerful currents running under the main vein of culture that is MPR's The Current.  But for most of Minnesota, these months tend to be the times where musicians and artists hunker down to hibernate for the winter, providing time to hone their craft.

One important point in my personal life happened in late December of last year.  I was hit by a car while biking to choir practice December 18th, 2013.  I had just finished up work at the ski hill for the day.  I got in a little snowboarding after work in the afternoon, ate the dinner I had prepared for myself, then I took off on my bike to make my way to Angelica Cantanti Encore Alumni Choir practice in south Bloomington.  At the time, biking was my main mode of transportation.  I  got rid of my last car about a year and a half prior.  I traveled down to 98th street by Normandale Community College, and I was passing by the Bloomington Ice Garden when all of a sudden I saw the headlights of a car in front of me as if I was standing in front of the car looking away from it's license plate.  I had only time to realise I was being hit, but not to react, then I was tossed akimbo into a blurry out of body experience, where I remember wondering at one point if I was underneath the car, then, taking assessment of myself, I realized I was not maimed.  I got up,  brushed myself off, and proceeded to record the event with the video camera on my phone.  As I was being carted away in an ambulance to the hospital, I posted the experience to YouTube.  Truly thankful of being alive and not crippled, broken, or concussed, I have nearly fully recovered now from the minor injury to my ankle, knee, and wrist.  Additionally, being the active person I am, I have been making good effort to utilize and strengthen the muscles of those areas to ensure a full and speedy recovery.  In a move of grand generosity, confronted with my determined assertion that I would continue to bike because it was my only affordable method of transportation, my parents decided to buy a new car for themselves.  That done, then they give me their old PT cruiser.  Having been saved serious injury in my first gravely serious accident on a bike, they decided to alleviate the financial burden for me of purchasing a car.  Alas, though I truly am thankful for their kindness and generosity, the added expenses of automobile insurance, gas, and maintenance have devoured the little expendable income I had previously relied on to finance my excursions to the shows of my friends and the music community.  So this last month I have spent the better part of my time working, saving money, and preparing to move to a new apartment at literally half the cost of my current living situation to alleviate my fiscal constraints.


That said, I do intend to write more frequently about the local music scene via the wireless bluetooth keyboard I bought to write post with on my phone.  I am far more efficient at typing than at touch screen poking or swiping.  Admittedly, it is a little frustrating dealing with phone technology lagging behind in compatibility with certain mundane tasks modern programs are capable of like a built in active spell check, and the lack of functionalities defined to mouse click and drag movements in web browsers...  None the less, I will pioneer forward with my utilization of this newer technology to pursue my goals effectively on the go.  The only thing I am missing is a good stand for my phone to keep it upright for reading while typing.

But now I am rambling, so I will conclude this entry on the first actually musically relevant point of the day.  Last Friday was the video shoot for MeMeMe's song Thee Dirty Heaven.  I awoke in the early morning on Friday groggy and stiff from a few good physical workouts involving snow removal at work in the recent days.  It was my day off, yet I still felt inclined to get up about the same time as I usually do for work.  The first thing I did was check my phone for the Facebook events of the weekend.  To my surprise, I found the Music video Shoot for MeMeMe was that morning just 15 minutes from the time I awoke at 8:45am.  I scrambled to get prepared, and soon was on my way in the bright, but cold,  sunshine of the last day in January.  The filming was already underway when I arrived after being caught in the fierce grip of gridlocked morning commuter work traffic.  The theme of the video was appropriately a raging rock house party.  The first order of business upon my arrival was the destruction of a bottle of wine with a golf swing captured in slow motion.  After a few botched attempts, and one broken club, the bottle exploded in a maroon balloon splash.  Having skipped breakfast myself to get there as quickly as possible, I was compelled to find some nourishment.  Although a Keg of beer was brought to legitimize the party vibe of the film, I set out in search of something breakfasty.  With a suggestion from the peanut gallery of the party it was decided on the tastily delectable pastry delight of doughnuts.  Though stymied by a lack of
local options for such confections, I returned in a little over an hour from a fairly decent trip to the closest cub foods with the questionably reliable sustenance we desired.  Through more shots of the blossoming party, I soon grew weary of the closed confines of the house party with such beautiful weather outside in the chilled sunshine that would feel so balmy and enjoyable on the slopes of the Hyland Ski and Snowboard area.  So, I bid adieu for the early afternoon to travel south tfor some riding in the beautiful weather.  Once I got my fill of the terrain park from being the only person in the larger section of the park for nearly a half hour, allowing me to get in a huge number of runs, I was exhausted and returned to the video shoot just in the nick of time.  As I walked into the set, the patrons of the party had just began taking swings at a piano destined for slow motion destruction capture for the video shoot.  Around the floor blew a layer of down feathers drifting and lofting, the fallen soldiers of a pillow war recently waged.  Intermingled with the floating feathers was a haze of dust from the ancient chambers of the piano's bowels, spewing forth the intestinal gasses of the long musically constipated piano into the room. 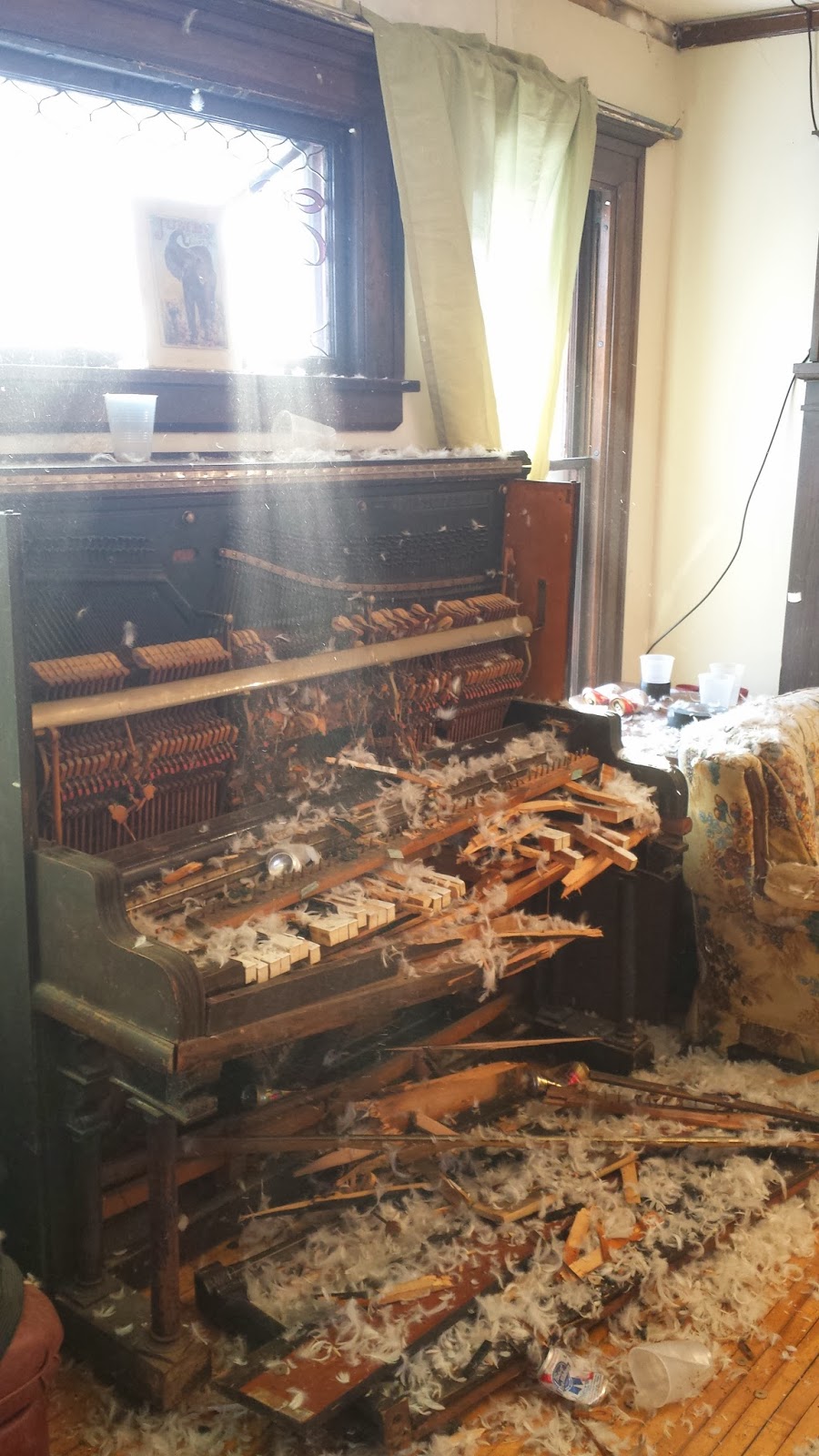 I stepped in line and got in some good whacks myself.  The camera is sure to have caught some incredible moments for the video.  There were only a couple more shots to get after that and it was a wrap.  A good time was had.

Posted by MatthewSudduthMusicBlog at 1:21 PM No comments: