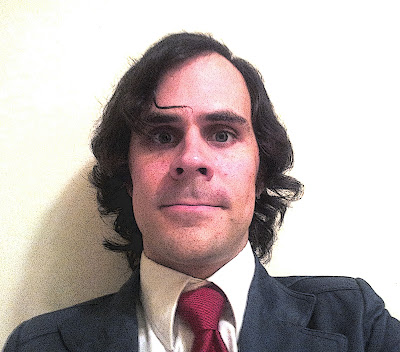 This summer has come on hard and fast.  I have long since shaved off the winter beard I had for it's warmth, wind blocking, and easily cleanable functionality.  I apologize to my readership for having taken such a long time off from writing. Sadly, I realize and lament how vital a link my blog is to the music community.  I have neglected to cover quite a few shows in this last few months and I should do justice for those hard working bands out there.  I will try my best to continue covering the music scene.  I truly wish that I had the income to support attending, reviewing, and acknowledging all the daily activity of shows the Twin Cities music scene has to offer.  Hopefully one day my efforts, along with those of others in the local scene, will help foster the audience and interest in local music that this area deserves. 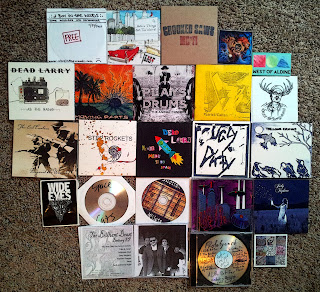 So yeah, that was a fun little diatribe.  In lieu of the posts I didn't write over the last few months, I will endeavor to arrange the major highlights from the spring and early summer months into a few posts to keep from making one overwhelmingly long post.  i.e. CD release parties and the like.

Despite the fact that I haven't been blogging as much these last few months, to my credit I have not been entirely inactive in the online music scene. I've posted quite a few sets of local music on my MNlocalmusic Soundcloud account over the last few months.  So far the list amounts to over three and a half hours of play time with 10 sets of Local Gems from artists around the twin cities area.  Many of the bands I included in those sets I have blogged about already, and the others deserve exposure too so check them out.


Way back on Friday April 26th 2013, as the snow was finally dissolving into obscurity, I headed to the Driftwood Char Bar in south Minneapolis to see the Space Monster CD release show.  Their groovy, funky, psychedelic, galactic, jazz inspired rock combination got the crowd dancing.  http://spacemonsterband.wix.com/main 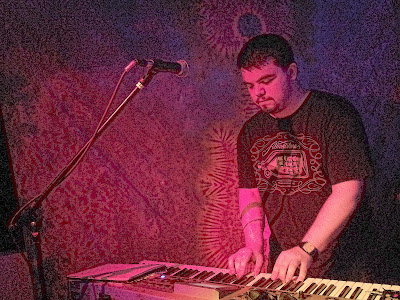 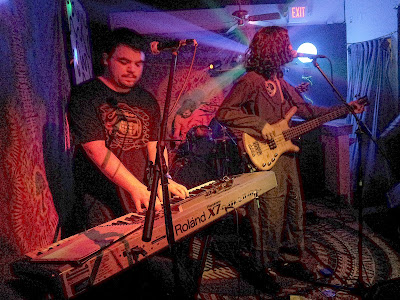 The other bands on the bill that night were Sticky Smash, who's set I missed, and Brice Plays Drums, who played some interesting technical jazz rock groves. 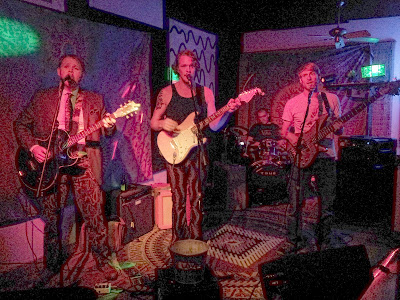 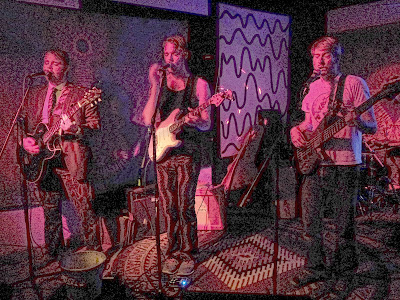 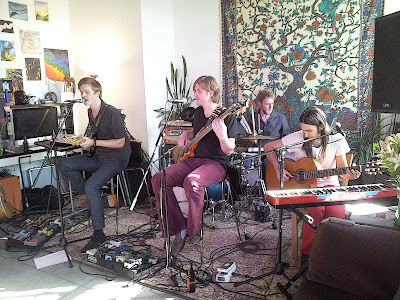 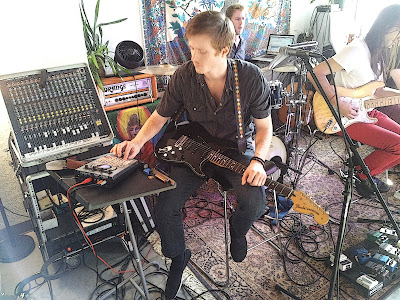 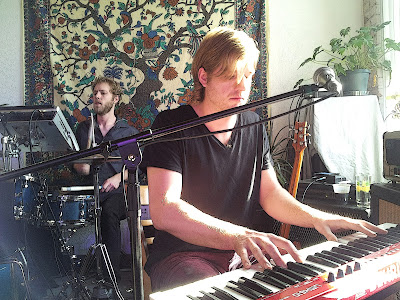 The following day Saturday April 27th was the Saint Paul Art Crawl.  As a local music supporter I recieved an invite to the artists lofts on University Avenue where an impressive new band of recently graduated students from the McNally Smith College of Music called Step Rockets played for an intimate gathering of art enthusiasts and friends in their loft.  It was a beautiful spring day and the music complemented that perfectly.  Their musical talent and originality is impressive and fun to move and groove to.  I added their single If You Tried as the first song on the MNlocalmusic Soundcloud set Local Gems 6. 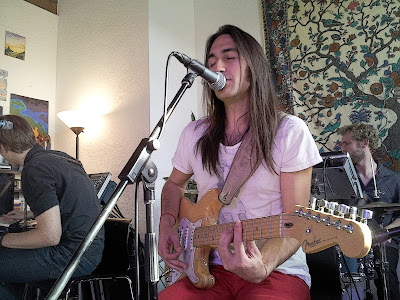 On May 1st I biked through the reluctantly receding wintery weather to the Fine Line music Cafe to see the first ever show by a band a new band called Snowbank.  I had bumped into the lead singer and guitarist for the band at the Cause Spirit and Sound Bar during a show in April.  I was happily obliged to join them for their first show ever.  Additionally, I added their single as the first song for my Local Gems 5 set on the MNlocalmusic soundcloud. Their first show went well and sounded good despite a lackluster weekday crowd, a somewhat odd mixture of bands on the bill, and the understandably shaky presence of their nascent band experience. 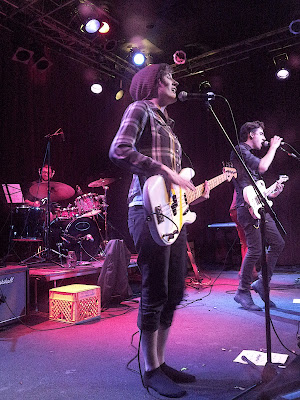 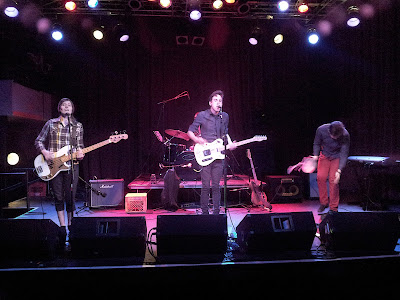 The following Saturday May 4th was Sabastian Love of Bad Medicine Productions' birthday celebration at the Sound Gallery.  He called it the first annual Dark 13 celebration.  It was an epic lineup of bands, rappers, and artists all coming out to celebrate one of the most influential music promoters in the Twin Cities area.  This was my second time attending a show at the Sound Gallery.  Like my first experience it was a diverse crowd of people from all walks of life who appreciate local music.  The two room venue was set up for two simultaneous stages: one in the bar area, and another in the main room.  Along with the musical festivities and featured bar room DJ Naughty Wood, there was a photo booth provided by Patrick McCutchan (www.StudioMcCutch.com), visual projections by VJ Mach FoX (www.MachFox.com), and live art by Angela Bird, Jon Andersen, and Paul Solem.  The full list of bands was as follows:

Although I would love to have been able to get pictures of all the bands and artists, I was only able to get pictures of a few groups because the libations, along with the conversation and entertainment, were flowing freely .  None the less, it was definitely one of the most impressive and entertaining shows I have ever been to.  Not only is The Sound Gallery a unique and interesting venue, but the people who attended truly made the night a success. 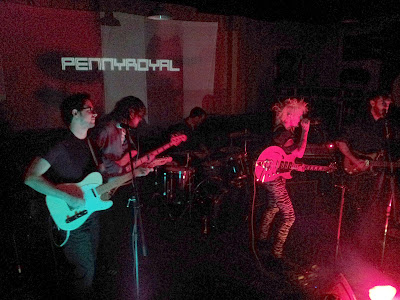 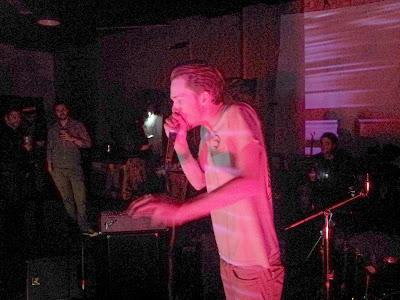 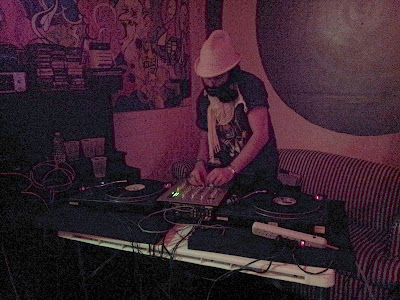 Starting in earnest on Cinco De Mayo (May 5th), Minnesotans finally received consistent relief from the cold.  People started flocking to the streets to walk, bike, socialize, and relax.  As an avid year-long biker, the large number of people biking made me especially happy.  Just one week prior to to then we received inches of snow accumulation as the oppressive and seemingly never ending winter lingered on with cold temperatures and frustratingly cold precipitation unable to figure out exactly whether it wanted to be snow or rain.  Our hearts and minds thoroughly enjoyed the catharsis of spirit that finally came from the soft spring rains, greening trees, and budding flowers.  Though the late winter weather had constrained the spring effervescence of spirit we longed for much longer than usual, the trees finally showed the end of the cold season with an explosion of buds on every branch and the cacophony of sound resulting from spring twitterpation.

On Cinco De Mayo there were a couple of fun events.  Every year there is a mayday parade and festival at Pouderhorn Park in Minneapolis, MN.  The parade is well known for featuring masterful puppetry by In The Heart Of The Beast Puppet and Mask Theater.  Although I missed the parade this year, I did catch a couple of the musical acts on the stage in Pouderhorn Park before heading to a nearby house party to see my friends perform.  It was the first outdoor house party with music I went to this year.  It was also the first time I got to see an impressive band called Black Diet.  The show also featured the return of my friend Cassidy Anderson's band MeMeMe, my first time seeing Noah Itman of Itmusic.us's project called Super Normal, and another unique project by some friends called Comfort Food.

With that I will draw this to a close for now.  Like I said earlier, there are still a couple months of backlogged events to cover.  I will work diligently to get those posted soon.  I once again apologize to my readership for procrastinating.  Please make sure to check out the MNlocalmusic Soundcloud channel to hear sets of great local music.
Posted by MatthewSudduthMusicBlog at 1:26 PM