This last weekend a local band I have been following for the last couple years finally released their debut album on band camp!  http://enormousbeast.bandcamp.com/ 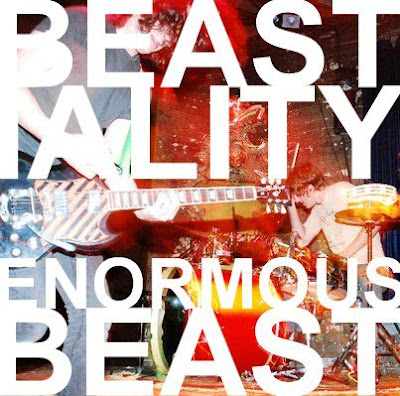 Enormous Beast is a band you should make it a point to go out to see live if you haven't yet.  They were on schedule to make a big splash in 2012, but they had to take a year long hiatus for personal reasons.

These guys make it an explicit point to be as full of sound as you can make a two person band.  Comprised of the drummer/singer Connor Mack and guitarist Rob Hedlund, they forgo the excessively contrived complexity of some bands in favor of simple riffs which spur in their listeners a deep seeded desire to rock the %#*^ out .  Their sound is instantly likeable for it's accessibility and intensity.  Additionally, they are hands down one of the most incredible local bands to see live.

Their drummer Connor Mack rocks his drums so hard that he needs physical restraints for his kit so that his base drum doesn't get away from him as he pounds it's essence into an unwieldy awesome mess!  Back in the days before he was able to tame his bass drum by putting a concrete block behind it anchored to a rug underneath the whole kit, every song he would need to reign his drums back into his vicinity as they slowly migrated across stage from his rocking intensity!

The passion for music these guys espouse leaves other bands blowing in the wind behind them.  So look forward to real big things for these guys in the near future.
Posted by MatthewSudduthMusicBlog at 11:04 AM